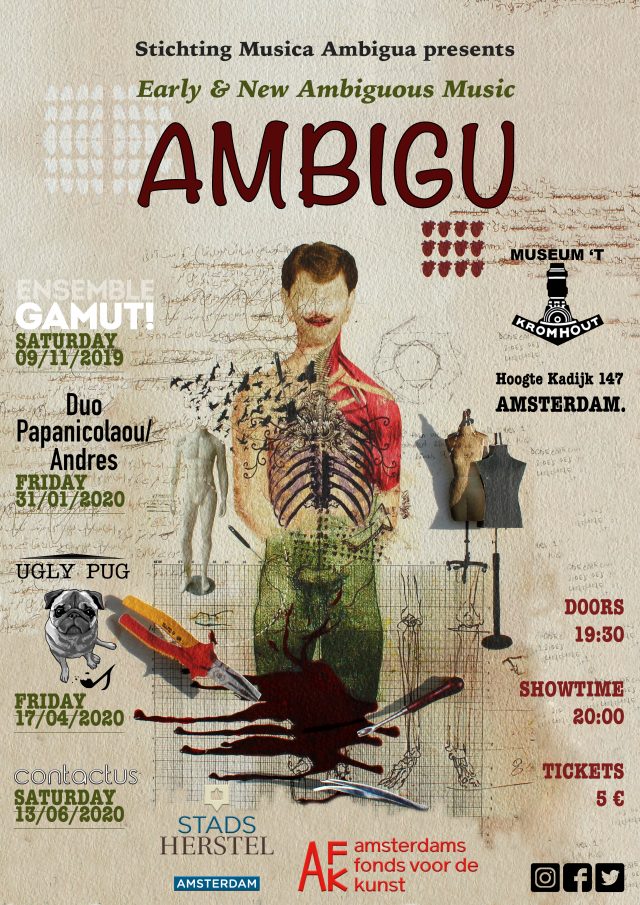 Ensemble Gamut! is a fresh, experimental collective of early music and folk music specialists, who are constantly searching for new ways to perform early music. Extensive experience of medieval, renaissance and baroque music, Finnish folk music and improvisation as well as strong curiosity for new soundscapes create a unique combination of colors. The programme ”J’ay pris amours” explores the musical and thematic common grounds in different faces of love as illustrated in medieval and renaissance manuscripts, Finnish folk song tradition and free improvisation.

The concert series Ambigu provides a stage for lesser-known and more rarely heard very early as well as brand new music. This is music that is ambiguous in mentality and spirit, and often falls outside the mainstream of early and contemporary music programming.
The concerts of Ambigu take place at the Museum ‘t Kromhout, a former ship engine factory at the centre of Amsterdam – an out-of-the-ordinary location with a robust and industrial sphere that goes beyond a conventional concert environment.
With the ambiguity characteristic of both early and new music regardless of the centuries in between as a point of departure, Ambigu acts as an accessible platform for experimentation, new approaches and concepts for the artists and concertgoers alike.

Ambigu is an initiative of Stichting Musica Ambigua, a new foundation set up to support early and new ambiguous music. Ambigu is made possible with support from Amsterdams Fonds voor de Kunst.