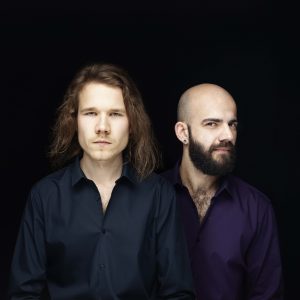 Contactus is a musical collective aiming to showcase a devotion for earlier music in a flexible duo or trio setting, formed by Juho Myllylä (recorders) and Miron Andres (vielle). The duo regularly expands into a trio and more through collaboration with singers and other instrumentalists to explore the immense range of colours the fascinating world of this earlier repertoire has to offer.

Juho Myllylä and Miron Andres began their collaboration whilst studying at the Conservatory of Amsterdam. They are both founding members of Ugly Pug, an ensemble devoted to the performance of new music on early instruments.

Due to the mutual passion for earlier repertoire – medieval and renaissance music, the two started finding each other on the medieval instruments more and more frequently. During their studies both have immersed themselves in the fascinating world of this music: they studied at masterclasses with Pedro Memelsdorff, Pierre Hamon, Kees Boeke and Corina Marti, for instance, and formerly Andres graduated from the Schola Cantorum Basiliensis in Switzerland.

In August 2016 Myllylä and Andres won the EAR-ly 2016 Nordic and Baltic early music competition, the final round of which was held at the BRQ Vantaa Festival (Finland). This brought along an invitation to give concerts at NORDEM’s member festivals during the season 2017/2018.

Besides Contactus also appeared at renowned European early music festivals such as the Fabulous Fringe series of the Utrecht Early Music Festival (The Netherlands) and MAFestival Brugge (Belgium).

The new programme has been constructed around pieces that survive in what is regarded as one of the most valuable medieval manuscript of music in the Royal Danish Library, and hence arguably in all Nordic countries: the Copenhagen Chansonnier. Remarkable among the relatively few manuscripts which hand down the French-Burgundian repertory of chansons from the late 15th century, the Copenhagen Chansonnier contains 33 secular pieces mostly in three voices.

This fascinating source portrays evidence of the widespreadness and influence of the music from the French-Burgundian courts. The Copenhagen Chansonnier is related to four other chansonniers known as the Loire Valley chansonniers – Dijon, Nivelle, Laborde and Wolfenbüttel – a group of songbooks copied in the Loire Valley region of central France c. 1465-c. 1475 and produced in the context of the French royal court. Beautifully decorated to the greatest detail, they represent the earliest surviving examples of a new genre which offered a combination of words, music, and illuminations.

Thematically, as illustrated by the grotesque and most imaginative decorated initials, the chansons are rooted far back in the history of courtly culture. They display continuity in development of the music and poetry of courtly love, and can be seen to carry on a tradition of the songs of the trouvères on the one hand and of the intellectual motet on the other.

Adeu, mon cuer presents an eclectic selection music of the late medieval and early renaissance times. At the centre of the programme is French music and its varied expressions of love and death. Pieces from the mid-15th century Codex Escorial and other concurring manuscripts represent the Burgundian Chanson repertoire – rondeaux, virelais and ballatas with their central themes, such as lamentation of the lover and the lover’s reproach of his or her cruel beloved. Like melancholic emotions are illustrated by the earlier takes from the late 14th century Ars Subtilior.

The programme will guide the listeners through a musical period that was filled with a sense of serenity, always with an underlying restrained sensuality and the ever-present death.

Music that is almost or partly Italian is the thought behind this atypical programme. The vivid and energetic tunes of the medieval 14th century Ars Nova, juxtaposed with instrumental keyboard music of the 15th century are bridged naturally to 16th century diminutions on themes of the renaissance. The recorders’ capabilities to express both the catchy monophonic dances, the melancholic and dream-like ballatas as well as virtuosic instrumental diminutions offer an interesting point of view to Italian music from three different centuries. Exceptions to the rule are the German Buxheimer Orgelbuch, whose link to the Italian Faenza Codex from the same period of keyboard intabulations is inevitable, and the diminutions, although Italian but based on themes by the renaissance masters of the Franco-Flemish school.

The recorders, reinforced by the accompaniment of medieval viola d’arco and renaissance viola da gamba take on to new heights in this rarely heard earlier repertoire with a lot of variety, on the one hand subtle and mysterious, on the other hand driving and adventurous.