2 recorder players amidst a fusion of old and new. 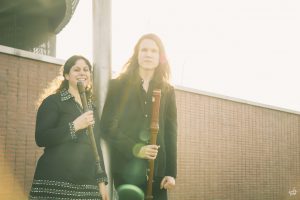 Galit Zadok (Israel) and Juho Myllylä (Finland) began their collaboration as Duo Northeast while studying with Jorge Isaac at the Amsterdam Conservatory. Both share the passion to enrich the surprising possibilities of two recorders coming together. The multi-cultural cooperation brings out a distinctive new approach to this musical journey.

During their 2-year existence, Duo Northeast performed in The Netherlands, Finland and Switzerland, and collaborated with a range of musicians and artists, including soprano Milla Mäkinen, sound artists Jaakko Kulomaa and Matteo Nicolin, as well as composers Giorgio Tedde, Omri Abram, Marcelo Politano, Danai Belosinof and Vincent Arp.

Contrast has been an element of central importance in musical composition throughout history. Drawing its inspiration from contrasts of all kinds in their diverse repertoire, Duo Northeast present a new concert programme Strain of Sound. The duo set on a search for striking contrasts within and between the works that range across different time periods, from the 14th century to 2017 – including two premieres of newly commissioned works. Centering around the combination of two recorders, this could mean underlining the differentiation and musical development by juxtaposing pieces written centuries apart of each other, as well as making use of the incoherence within the music as an interpretive device. On the contrary, the use of live electronics in both early and contemporary music bridges the centuries together, resulting in an indelible fusion of timeless sounds.

North, East & Between is a mixture of medieval, renaissance and contemporary music with live electronics. Through the combination of two recorders, works written over the span of 700 years link to each other and appear in a new light.
From the medieval groovy danceable tunes, via the rhythmically complex polyphony to western and non-western contemporary music, Myllylä and Zadok use this exquisite recorder literature to demonstrate the continuity between the centuries. Live electronics are being used variedly in means of both early as well as contemporary music.